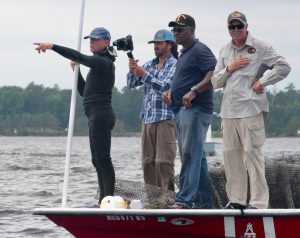 The North Carolina Wildlife Federation announced the winners of the 56th Annual Governor’s Conservation Achievement Awards and CCA NC Legacy Life Member and Executive Board Vice-President Rocky Carter has been honored as the 2018 Sportsman of the Year.

The press release said, “This year’s winners are exceedingly notable conservation devotees who work for wildlife, habitat and those who cherish natural resources. They are land stewardship champions, water advocates and leaders in the preservation of unique ecosystems. The award winners include agency professionals, elected officials, dedicated volunteers and organizations rising to the challenge.”

As the Sportsman of the Year, the release said Rocky is, “Passionate about hunting and fishing; Carter epitomizes paying it forward by working for better management and enforcement of rules for fish and wildlife. Carter works to engage youth in fishing, spearheads Wounded Warrior events, and champions habitat restoration projects. He relishes and practices the responsibility as a sportsman to make sure our public trust resources are there for future generations to enjoy.”

CCA NC was proud to support Carter’s nomination as Sportsman of the Year, writing in part that, “Rocky Carter is that rare individual who never enters into anything half-heartedly or without careful consideration of the consequences and the expected outcome. Such was Rocky’s decision to get involved with conservation of our coastal marine resources and their habitat.

“Rocky Carter grew from a humble beginning in Western North Carolina to become a successful businessman. All along this journey, Rocky developed a love for fishing whether it be fashioning home-made tackle so he could fish the lakes and ponds of his childhood to where he was always ready and willing to take a friend fishing in his adopted home of Swansboro. It was this journey that led Rocky to the understanding that to those who are given so much, so much is expected. The same spirit that drives true conservationists who understand that it is our responsibility as sportsmen to make sure our public trust resources are there for our future generations to enjoy.”

This spirit of conservation led Carter first to the Coastal Conservation Association where he wasted no time becoming a Life Member. He later attained both the Heritage and Legacy Life Member levels, and helped start the Onslow Bay CCA NC Chapter in Swansboro. This chapter quickly became one of the largest N.C. chapters in both members and money raised through their annual banquet.

But the greatest legacy of the Onslow Bay Chapter is the fellowship and service of the local membership that fishes together on a regular basis and is the leader among CCA NC chapters in community service. The chapter hosts two weekends each year, in the spring and fall, to take active duty and retired military personnel fishing. The events provide a social outing in thanks for their service and as a means for many to escape the memories of their sacrifice.

The chapter also hosts a free kids fishing tournament in August called the Fishing for the Future Tournament that gets over 100 kids out on the water each summer bringing a whole new generation to the joy of outdoor activities and conservation. And Carter is the glue that holds all of this together.

The nomination also read, “When the City of Jacksonville came up with the idea for the New River Oyster Highway as a way to introduce new oyster reefs in the New River, Rocky was quick to jump in with his support and leadership. The project brought together support from the City of Jacksonville, Camp Lejeune, the UNC Institute for Marine Sciences, the N.C. Wildlife Habitat Foundation and CCA NC.

Carter was part of the small band of volunteers from the City of Jacksonville, the UNC IMS and CCA NC who worked for two weeks on the placement of the new structure and oysters that ultimately will form the New River Oyster Highway. “It was sometimes back-breaking labor in the chilly spring waters of the New River, but it was fitting that Rocky was a part of the final implementation of what started as an ambitious idea to create new marine habitat. Throughout the process, he never wavered in his support or doubted that it could be done.

“Rocky Carter embodies the spirit of what it is to be a true conservationist. He has given generously of his time, money and leadership to make a difference. He recognizes that without people who are willing to stand up for our coastal resources their future abundance is not guaranteed. In fact, without people like Rocky we should expect the opposite.”

Carter follows another CCA NC Legacy Life Member, Eddie Smith, who was recognized last year by the NC Wildlife Federation as its 2017 Sportsman of the Year.

All of the award winners were recognized at the NCWF Governor’s Conservation Achievement Awards banquet on September 7, 2019.