After spending six years on the N.C. Marine Fisheries Commission, Chuck Laughridge doesn’t feel he accomplished much and is frustrated by the failure of all stakeholders to “do the right thing” for the resource. “Without change, the outlook for the state’s fisheries is bleak,” he predicted. 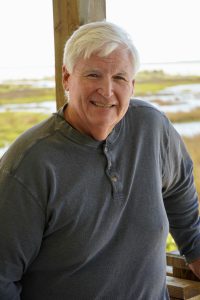 Laughridge has a long history in fighting for the resource. In the mid 1980s, he was instrumental in starting the Roanoke Valley Striped Bass Coalition that showed legislators, MFC members and writers the value of the fishery by getting them on the water. Rules were put in place that brought the striped bass back. He was active in Ducks Unlimited and the Wild Turkey Federation, but an outdoor writer, George Reiger from

Field and Stream magazine, told him the best dollar spent would be with the Coastal Conservation Association. Laughridge went to a fundraising banquet in Nashville and became a Life Member.

After serving on the CCA NC executive board for years, an old Rocky Mount high school buddy, the late Bill Daughtridge, approached Chuck about appointment to the MFC by Gov. Pat McCrory. Daughtridge was McCrory’s transition team leader and later became Secretary of Administration. Laughridge was first slated to be named chairman but several friends advised him he could have more input if he were not chairman so he accepted an at-large seat. He was reappointed to a second three-year term, moving to a recrea

tional seat. For four of the six years he was on the MFC, Laughridge served as vice-chairman.

The politics of fisheries management is putting our marine resources in danger, he inferred. “The Fisheries Reform Act of 1997 is one of the most powerful pieces of legislation ever enacted but it’s been bastardized,” Laughridge explained. The bias toward maximum harvest for the commercial industry led to threats several years ago by legislators like Bob Steinburg, Jerry Tillman, Norman Sanderson and Bill Cooke when the MFC talked about cutting back on the Southern flounder harvest. They threatened to sponsor legislation that would emasculate the MFC.

“They were very difficult to talk to,” he said. “Their idea of a fisheries discussion was a prayer breakfast with Jerry Schill (lobbyist and former director for the commercial N.C. Fisheries Association).”

Laughridge faults the N.C. Division of Marine Fisheries for its inertia in dealing with crises like the crashing Southern flounder population, striped bass, gray trout and other species popular with recreational fishermen. A Fisheries Management Plan that governs allowable catches on a species shouldn’t take five years to update and be peer reviewed, he said. “It should only take two years max; they could do it in 14 months but that would m

ean DMF employees would have to change and they don’t like change. Their excuse is they’re overworked and underpaid.”

North Carolina’s DMF has long been recognized as having good scientific data. “It’s the gold standard compared to other states,” Laughridge said. “It’s supposed to be used to make decisions, rules and policies but they don’t use it. It’s like having Hank Aaron as a high school third base coach.”

If the DMF had used its data to recommend reductions in the Southern flounder harvest in 2015 when early numbers showed a 42 percent reduction in catch was needed, “we wouldn’t be where we are now facing a 72 percent reduction” to stop overfishing, Laughridge said. Instead a suit by the NCFA blocked a supplemental flounder plan. “The suits are all gone now and the commercial industry is in worse shape than they were.”

He didn’t leave recreational anglers unscathed either. “There are too many people on the commercial and recreational sides that want to manage fisheries without data, especially flounder. You can’t have anything without limits.” There’s never been a check written from a bank account to a politician that says anything about the economic benefit of the fisheries, he said.

If the legislature changes anything on fisheries management, it makes one side the apparent winner whether it’s Brent Fulcher, a big commercial operator,

or Allen Gant, a recreational proponent. “These guys (politicians) get money from both sides so they’re tickled to death to have a problem. Likewise at DMF, if there were no problems, they’d be out of a job,” he continued.

Laughridge even took the Marine Fisheries Commission to task for its inefficient operation. Fishing was a “$2.2 billion industry, now it’s close to $4 billion but the MFC only works 36 hours a year to manage the industry. Look how often the UNC Board of Governors meet or the Department of Transportation board. We should gather monthly, and the same for the advisory committees.”

The MFC has one of the largest rulebooks in the world, he added. “That’s very frustrating.” It was also frustrating when Michael Regan, secretary of the N.C

. Department of Environmental Quality that oversees the DMF, suggested North Carolina should look at other states to see how they manage Southern flounder. Then Regan sharply criticized the MFC for overriding DMF Director Steven Murphey and ordering him to take all gill nets out of the Neuse River when the striped bass season was closed earlier this year to save a large year class of fish.

Laughridge can’t point to any big accomplishments while on the commission. Yes, they saved two unusually large year classes of striped bass that mysteriously appeared in the Neuse this year and anglers are enjoying a banner year for speckled trout. That’s attributable to quick action by the DMF director in closing the season when a cold stun

is imminent. Hurricane Florence, which disrupted fishing last fall, allowed females to spawn several times. And the DMF is now managing to the Southern flounder target. “We just did what was right,” he said.

Without a poundage quota on commercials, there’s no way landings will reach a 62 percent reduction, he said.  It should be taken off next year based on trip ticket data from 2019, but DMF doesn’t manage Southern flounder in arrears the way it does red drum. “You cannot have any fishery even with size and seasonal limits that allows you to extract unlimited numbers of fish.”

Laughridge plans to be active with the N.C. Legislative Sportsman’s Caucus and hopefully influence opinion there. He also helps out the pro-resource NC Sound Economy that has become the N.C. Marine Estuary Foundation. It will take a major initiative for the commercial industry to see the economic benefit of a robust fishery. If that doesn’t happen, then recreational anglers should stop giving money to politicians and use it to file lawsuits.