Posted at 17:24h in CCANC News Blog, General by CCANC-Rip 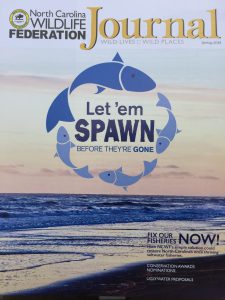 House Bill 483, Let ’em Spawn, passed its Second Reading on the House floor on June 19 by a margin of 58-54 and with objection to a Third Reading it was calendared for Third Reading the next day where it passed by a margin of 58-47. You can see how your Representative voted here: https://www.ncleg.gov/Legislation/Votes/RollCallVoteTranscript/2019/H/518

This was an historic vote—no fisheries reform bill has ever made it to the floor of either chamber, must less been passed! CCA NC worked closely with the NC Wildlife Federation and Lead Bill Sponsor Rep. Larry Yarborough (Person, Granville) over the last six months to help make this happen. It took an exhaustive team effort that would not have been possible without the crafting of bipartisan support from legislators in the face of intense lobbying against the bill by the N.C. Department of Environmental Quality (NC DEQ) and coastal legislators. GOP coastal representatives succeeded once again in disrupting the Republican Caucus while the Democratic Secretary of DEQ, Michael Regan, successfully split the Democratic Caucus with his opposition to the bill.

Reps. Jay Adams (Catawba), Jon Hardister (Guilford), Carla Cunningham (Mecklenburg), Michael Wray (Halifax, Northampton), Brian Turner (Buncombe), and Billy Richardson (Cumberland) all worked to whip votes to make sure this victory for the resource was possible. Rep. Yarborough was a leader throughout the legislative process and strong in carrying the bill on the floor. Special thanks should also go to Reps. Adams and Richardson for their impassioned floor speeches in support of our coastal resources during Wednesday’s debate.

Regrettably, there was an awful lot of noise from on the House floor during the debate over House Bill 483. Here are some of the high points.

There was much discussion by Rep. Larry Pittman about the current abundance of speckled trout and red drum being caught in North Carolina waters. His hypothetical argument was that if our fisheries are in such bad shape, why are recreational fishermen catching so many fish?

Both of these fisheries are in good shape because of strict management measures put in place by the N.C. Marine Fisheries Commission. The minimum size limit for speckled trout was raised from 12 inches to 14 inches and the recreational harvest limit was reduced from 10 fish per day to four fish per day. At this size limit, speckled trout are able to spawn twice before they reach harvest size.

Rep. Pittman also mentioned the effect of “cold stun events” on speckled trout, when temperatures drop so low that there is a hard freeze on our creeks and rivers killing many speckled trout before they have a chance to escape to deeper water. The last cold stun event was experienced in the winter of 2017 and for the first time the Division of Marine Fisheries director, Stephen Murphey, closed the harvest of speckled trout immediately to protect the fish that were able to survive the freeze. The large abundance of fish anglers are seeing this year are the direct result of these proactive management measures and the fact that trout and red drum are not significantly impacted by shrimp trawling. Speckled trout management is the poster child for H483, Let ’em Spawn.

Red drum are managed by a slot limit of 18 – 27 inches with a daily recreational bag limit of one fish per angler. Red fish live to be 50-60 years old thus not harvesting these fish over 27 inches allows the big spawning females to continue reproducing. HB 483 also includes a provision that encourages the use of a slot limits where it is appropriate for management of that species. Again, red drum is a perfect example of how HB 483 management by size limits can be effective.

There was also much discussion about the abundant recreational catches of striped bass on the Pamlico River. The U.S. Fish and Wildlife Service and the Sportfish Restoration Fund have been spending $600,000 per year on average for at least the last 10 years to stock striped bass in the Tar-Pamlico, Neuse and Cape Fear Rivers. Biologists from N.C. Wildlife Resources Commission and the N.C. Division of Marine Fisheries agree that almost 100% of the fish in these river systems are now stocked fish. There are almost no native striped bass in these rivers anymore. If it were not for the stocking program, anglers would catch very few striped bass in the Pamlico, Neuse and Cape Fear rivers.

There were several comments about this bill putting commercial fishermen out of business. Specific attention was given to the blue crab fishery and the loss of crab processing facilities. The latest stock status report on blue crabs by the NC DMF indicates they are overfished and overfishing is occurring. Crab populations have not declined because of over-regulation and the loss of crab processing facilities has more to do with socio-economic factors than state regulations. Crab pickers back in the day were almost exclusively local women, but when that generation died off there were very few locals interested in that  work anymore. What regulation or regulations specifically have put these folks out of business?  We can’t think of one. However, we do know that many of the fish houses sold out when real estate prices were so high.

There was also a lot of debate about the use of landings data as evidence of a declining fishery. Landings are just a symptom of a declining fishery. If the fish were available, the fishermen would pursue them, so reduced effort by fishermen is due to no fish. Not over-regulation. It should also be noted that the primary fisheries in N.C. have virtually no regulations; minimal on shrimp, virtually nonexistent on crabs. No limits on shrimp, crabs, spot, croaker, mullet, bluefish, Southern flounder, and kingfishes. And the commercial quotas on some stocks are not even filled; examples include Spanish mackerel, dogfish, and king mackerel.

It was also mentioned several times that North Carolina had as many as 30,000 commercial fishermen at one time. This has never been true, in fact the latest License and Statistics Report published by NC DMF shows there were 6,990 Standard Commercial Fishing Licenses issued in 2000 compared to 4,824 issued in 2018. A declining trend but also a far cry from 30,000.

Rep. Michael Speciale also questioned the lack of “biological studies” produced since the 1990’s. We refer you to the NC DMF website for a list of the Fisheries Management Plans that are currently under review, including detailed stock status reports on the fishery under review. It is generally conceded that NC has some of the best fisheries data of any state on the east coast: http://portal.ncdenr.org/web/mf/fmps-under-development

Blue crabs, Southern flounder, shrimp and estuarine striped bass are all currently under review and an additional nine plans are on the schedule for review through 2023. The current stock status report for Southern flounder was produced by a team of NC DMF scientists and peer reviewed by a panel of outside scientists. The 288-page report concluded that Southern flounder are overfished and overfishing is occurring.

Opponents of coastal fisheries reform have once again chosen to work against efforts to rebuild our declining fish stocks by surrounding a good piece of legislation with misleading and disingenuous noise. We are asking you to block out the noise and please focus on the original spirit and intent of House Bill 483 – Let ’em Spawn – which was the idea to set minimum size limits for six of our important recreational and commercial fish stocks where we allow 75% of them to spawn at least one time. This will not fix all of the problems with our coastal fisheries, but it will begin the rebuilding process for many species that have been in decline for decades.

It is difficult to argue against the original intent of this legislation without throwing up a bunch of ridiculous “what-if” objections. The real question is found in the latest NCWF Journal, “Why would we kill so many fish before they can reproduce?”

Please block out the noise and focus on the problem at hand. Many of our important fisheries have been in decline for too long and we can no longer wait for the Division of Marine Fisheries to figure it out. HB 483 is a common-sense starting point. As this bill moves to the N.C. Senate for consideration, we would appreciate your continued support.