Posted at 16:30h in General by CCANC-Rip

Two CCA NC sponsored fishing tournaments, the youth Fishing For The Future contest and the first Inshore Open, generated good times and excitement, a brief respite from the worries of the pandemic. 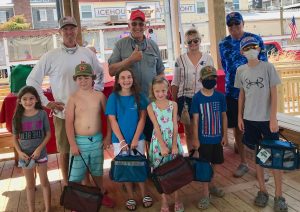 We had a great time seeing all of our young fishing friends and their families at the fourth kids’ tournament August 15 in Swansboro. We had 126 total kids participating this year.

The first 100 registered received the ultimate swag bucket wrapped by Crystal Coast Graphics, t-shirts donated by Image Builders Embroidery & Screenprinting, and Star rod and Penn reel combos provided by The Reel Outdoors and Big Rock Sports. Special thanks to all of our sponsors this year including Lisa and Rocky Carter, Morton Trucking, Horizons East Building and the N.C. Outdoor Heritage Advisory Council.

Do yourself a favor and take a kid fishing. It’s really fun!

We also had a great finish to our first Inshore Open in the Wilmington area of the state. The top spots came down to the wire and the final day did not disappoint with several anglers logging some huge fish in an attempt to push themselves up the leader board.

David Clem, Brandon Mayo and Bob Carr made a competitive effort but all finished within five points of the top spot. Ultimately it wasn’t quite enough to overtake Kyle Peters, the leader and winner of the 2020 Inshore Open.

Kyle established himself as this year’s top angler among a tough field of competitors. He logged a whopping 48 total fish while posting a winning aggregate score of 163 consisting of 91.5 points for his three biggest redfish and 71.5 points for his three biggest flounder. It was an incredibly impressive showing that deserves virtual round of applause.

We would also like to congratulate our second and third place winners:
Bob Carr with162 points and Brandon Mayo at 160 points.