Posted at 18:03h in CCANC News Blog, General by CCANC-Rip 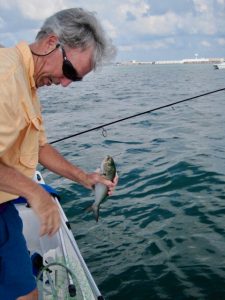 In mid-December 2019, the Mid-Atlantic Fishery Management Council (MAFMC) recommended and the Atlantic States Marine Fisheries Commission (ASMFC) approved, new recreational fishing regulations for the 2020 Atlantic bluefish fishery from Florida to Maine. These measures, which include a three-fish bag limit for private anglers and a five-fish bag limit for for-hire fishermen, represent a substantial reduction compared to the federal 15-fish bag limit that has been in place since 2000.

Managers have stated that the data on bluefish, both scientific and anecdotal, indicates that a reduction in harvest is necessary to increase the spawning stock biomass and end the overfished state. The reductions recommended by the MAFMC and approved by the ASMFC, on top of other recent major changes to limits in North Carolina, such as estuarine striped bass and Southern flounder closures, pose a significant challenge for recreational anglers.

Many anglers in North Carolina are rightfully frustrated with the state of our fisheries, largely the result of bias – real or perceived – by fisheries managers in favor of unsustainable commercial fisheries until drastic conservation action is necessary. In the case of bluefish, the reduction from 15 to three is a shock to most anglers and it is particularly frustrating given that managers for years have regularly shifted un-caught recreational bluefish quota to the commercial sector because commercial harvesters had caught all of its allocation. If those fish had been allowed to remain extant in the system rather than shifted to the commercial sector and removed, it is likely the fishery would not be in need of dire restrictions today.

Managers say that the steep reduction in the bag limit is necessary because, so few anglers were actually catching 15 bluefish per trip that the limit had to be reduced all the way down to three in order to produce the necessary reductions in mortality. This is a rather damning reflection of the inadequacies of the management system that the declining state of the fishery didn’t trigger action before now.

It is unfortunate that managers did not have the information necessary to correctly assess the population. A recently completed recalibration of historic recreational catch indicates that the bluefish stock may have been overfished since 1985. If that is indeed the case, then management action is certainly warranted and CCA NC was prepared to support a five-fish limit in order to recover the stock.

The three-fish limit for private recreational anglers was a surprise, especially when the for-hire industry was allowed to maintain a five-fish limit. Different limits for different portions of the recreational sector is a controversial management approach that makes a difficult situation even more contentious and divisive. Given the nature of the bluefish fishery, however, it is unlikely that the different limits will have a negative resource impact. Coast-wide, the for-hire industry contributes only a small percentage to the overall bluefish harvest, but the varying limits within a sector should not become common practice.

Bluefish are a cosmopolitan species that attack a bait with gusto. While they may not be actively sought after as the primary species, they have saved many a trip for anglers. An abundant bluefish stock should be one of the primary goals of managers for this species.

It is alarming that the bluefish fishery was allowed to wallow unnoticed in an overfished state for more than three decades. That negligence, and an entirely unstandardized, haphazard practice of reallocating fish from the recreational sector to the commercial sector, combines to make painful management actions necessary today. Recreational anglers and the public that owns these resources deserve better than this.